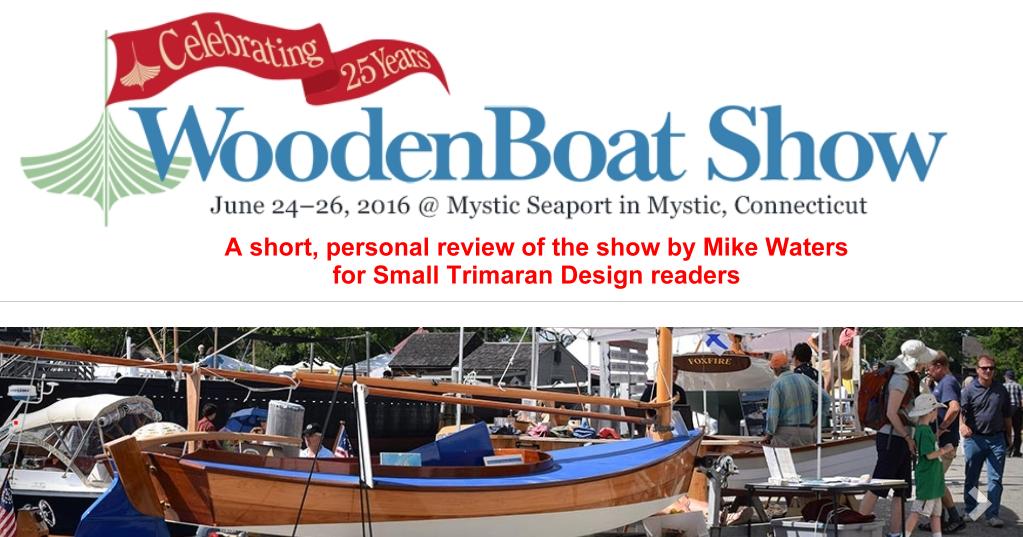 Late June, my W17 was trailed to the WoodenBoat show at Mystic, on the encouragement and interest expressed by John Harris of Chesapeake LightCraft (CLC) who now have kits available for all the W17 plywood parts. John and others were very keen to see a boat fully rigged, and judging by their reaction, were not disappointed. “I’d actually like one of these myself!” concluded John, and most performance-oriented sailing fans who passed through, reported that they ‘found the boat the most interesting, well engineered and exciting new boat at the show’. It was fun to be able to explain to the generally knowledgeable crowd, the detailed reasons for doing things the way they are, and seeing them nod with approval. The new do-it-yourself carbon fiber wingmast also raised much interest. Shown as a ‘Build-it-Yourself’ boat, no commercial selling is permitted and for me, that was good. Today, websites typically cover all that.

But of course, to put things in perspective, over 90% of this show is dedicated to older style, traditional monohull wood boats – the majority of which are lapstrake - with examples in both solid wood and plywood. But as one reporter told me, “that old canal boat over there is ‘one bookend’ for me …. but your W17 trimaran is clearly the other ! ”. 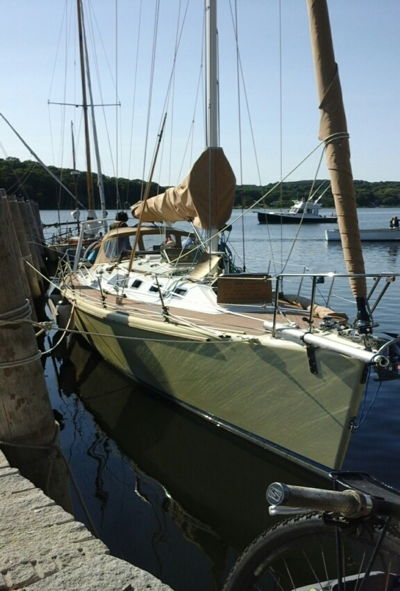 Demonstrations were running throughout the 3 days and you were able to watch how complete amateurs could put together a basic, unpainted kayak or canoe kit in that time – or witness the skills required to fashion oars, tie special knots, or even witness the basics of vacuum bagging from a simple but effective demonstration by multihull designer John Marples. Dudley Dix, one of the world’s most prolific designers using plywood was also present, and his work was represented not only by a simple but fast bass-boat design, but also by one of his most successful yachts … a sleek CR40 that was apparently built over a period of 6 years in a Colorado driveway! This boat was so beautifully finished in every detail that it won the 2016 Concours d’Elegance for home-builts and deservedly so (see photo). Unusual for a large wood boat, Dudley does not even call for ANY fiberglass sheathing in his specs, so the surfaces inside-and-out, simply have 3 coats of epoxy combined with fairing fillers and finally 2 coats of 2-part urethane paint. The CR40 is closely based on the slightly smaller “Black Cat” design that Dudley built for himself to race and features a gently vee’d bottom with fairly vertical sides (no doubt for low wave-making as for the W17) – both connected to a soft bilge created by 3 layers of 3mm ply forming the ‘radius chine’ .., all as described under “Construction Methods” elsewhere on this website. Being laminated, the radius chine is tough and all ply joints are made over internal stringers that get closer to each other at the ends – automatically making the hulls stiffer in the most common collision area. With more than adequate keel weight (about 50% of displacement), these boats can sometimes be driven like large dinghies and Dudley reports speeds in excess of 20k in the right conditions.

The show also featured many examples of the kit boats of CLC and other makers – often with a boat being assembled in real time while visitors looked on. Head man John Harris of CLC was also justifiably honored at a special dinner. What a great display their boats presented.

Inside the main tent, numerous vendors had kiosks set up and were offering everything from hats to keep off UV light, to Japanese saws and sharpening stones, with epoxy people like WEST System and MAS being prominent also. Of course, the WoodenBoat people are everywhere and it was impressive to see a table laid out with most past issues still being available and a computer database to find the issue that might best help you. I even bought 3 myself. Many Herreshoff boats were present and some fine copies too … and I was also a little taken aback to find another ‘W22’ has come to life over the last 2 years .. but being as it’s a classic monohull and not a multihull, this should not cause too much confusion. Although the font is very similar, the monohull sail insignia has the W underlined and followed by a period … thus appearing as W.22 …. and of course, the sail shape is more traditional without a full flat top. … phew !

Below is a photo of the W17 on the Village Green along with other home builds. It was also great to see Vincent Musa visiting from the Philippines as he is just getting set-up in CEBU to start building W17’s, plus a smaller wood tri for young people to learn in, all under the name of ‘CEBU Trimarans’. 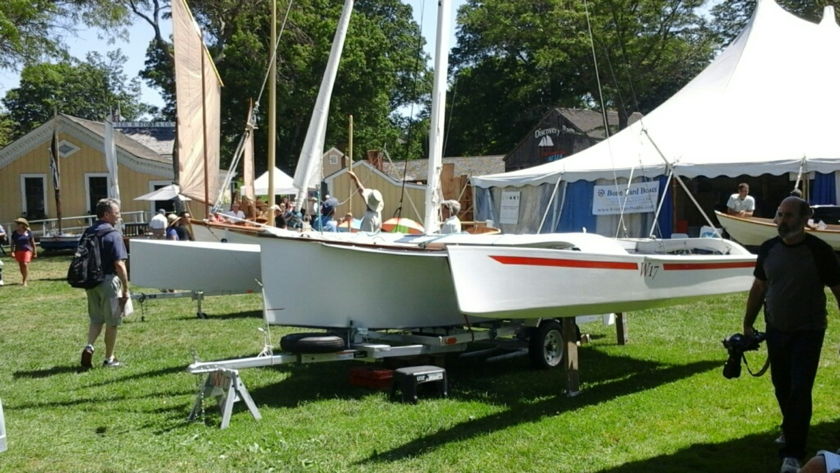 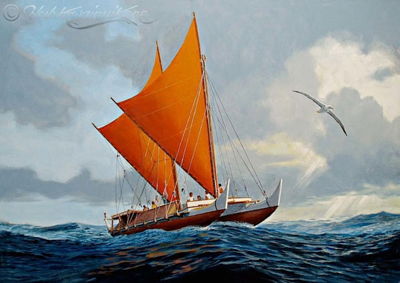 One fascinating treat at the Show was the timely presence of the Polynesian catamaran Hokule’a, or “Double-Hulled Canoe” as such craft are still known in the Pacific islands. Under the flag of The Polynesian Voyaging Society, Hokule’a is presently sailing around the globe, and visiting over 100 ports to spread and co-ordinate a critical message, that we need to develop more sustainable ways to live in order for this world to survive. (see more at www.hokulea.com). This boat was originally conceived by the historian and visionary artist Herb Kﾄ］e (pronounced KAH-ney), based on historic notes of how Pacific Islanders travelled and migrated 2-3000 years ago and here is one of several wonderful paintings of his from this website:

As I was unable to learn anything technical from a couple of crew members on the boat while at the show, I drew on past resources and some research to learn the following. From an exchange I had recently with designer Barry Choy, (son of the well known Rudy Choy who was designing Pacific cats over 50 years ago), Rudy did much of the hull, structural and rig design for the 1975 Hokule’a (and the other historic replica Hawai’iloa) but clearly in line with the vision of Herb Kﾄ］e, who is now a highly respected figure in Hawaiian history (1928-2011). (Note that the hulls are not asymmetrical, as were the later ManuKai and Aikane of Rudy Choy) .. see:
http://www.choydesign.com/about/history.htm

I also dug this up and it contains some interesting design data that Herb Kﾄ］e documented.

Nainoa Thompson is now captain of the Hokule’a and here is his explanation of why they are still undertaking these challenging voyages in modern times. In summary, it’s to try and wake-up the world to it’s rising predicament!

And the last 40 years have not always been easy or without serious challenges. Just read this account of when the boat capsized in 1978 ! (Note that the boats have less beam than would a modern catamaran. Beam was limited by the available means of joining the hulls - crude lashings using natural plant fibers).

Overall, the Woodenboat Show was a great success even if the number of visitors and boats exhibited appeared down this year. People I met seemed genuinely enthusiastic and happy to be there, and both Woodenboat personnel and their helpers did a great job.

Thanks also to my friend Mark who accompanied me down there, helped to answer questions while I looked around, and made sure my wires and halyards were not going to remove the paint or abraid while trailing the boat ;) Good job buddy.